But what binds the Torah? The wimpel, of course.

The art of the Torah binder stretches back hundreds of years, providing a visceral connection to the Jewish villages and ghettos of seventeenth — and eighteenth-century Europe.

In those small, cramped enclaves an infant boy, wrapped with a long ribbon of cloth to keep him from moving during the bris, was entered into the covenant with God through circumcision. After the ceremony the child’s mother or another woman would take the circumcision cloth, cut it into strips and sew them together into one long piece. She would decorate it with the boy’s Hebrew name, the father’s name and a prayer that the child be raised in the ways of Torah, marry a Jewish woman and do good deeds; brightly colored images of animals, birds and Zodiac signs were added.

Three years later at the boy’s upsherin (first haircut), the family would present the decorated cloth — known in Germany as a wimpel and in Italy as a mappa (Hebrew for cloth) to the synagogue. Years later, that same cloth would be used to bind the Torah at the boy’s bar mitzva.

In Germany, wimpels were created exclusively after the circumcision ceremony, so only males received this honor. In Renaissance Italy, however, where women enjoyed respected status as poets and philosophers, scholars and professional artisans, the mappot were used not only to commemorate a bris but other life-cycle events involved women such as marriage. Mappot were know for delicate and intricate stitching and for the fine linens used. The bride’s name would appear alongside the groom’s, and often the woman who created the mappa would sign it as well.

With infrequent exceptions, primarily in very Orthodox communities, the wimpel/mappa tradition has lain dormant for at least 200 years. But like many Jewish rituals and customs, the art of the binder has been transformed into something that honors both males and females in a distinctive twentieth-century ways.

At Congregation Beth Shalom, a Conservative synagogue in Pittsburgh, Leslie Golomb Hartman conceived The Wimpel Project. When the Reform Hartman married an Orthodox man and sent her daughter to Hebrew school and junior congregation services, it “sparked an interest in discovering my own place in Judaism,” the nationally known fiber artist says, explaining the project’s genesis. “Rabbi Chuck Diamond [the synagogue’s director of education and youth programs] called me up to the Torah as g’lila, the one who wraps the Torah prior to its return to the Ark. 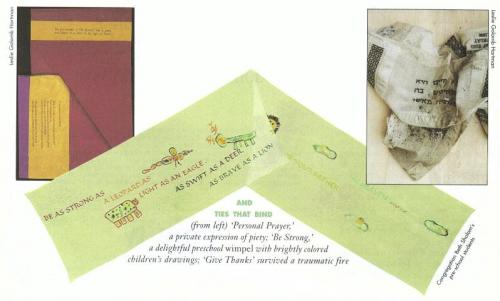 “They gave me this plain piece of white cloth; it was a rag, really, and I went home and asked myself how come we are using these crummy wrappers. As far back as the First Temple, women had been involved in hiddur mitzva, making rituals more beautiful, so I began to do research.” And form a plan.

“I really wanted this beautiful tradition to include boys and girls.” She remembers. “I have a lot of concerns about women’s roles. In Italy, they used mappot as personal expressions of their piety. My ultimate goal is to see this ritual revived.”

She brought the idea to Diamond, who was immediately struck with the education and fund- raising potential. “I was fascinated,” he remembers. “My mind started racing with programming possibilities.”

Hartman recruited several accomplished local Jewish artists to participate in the project, and the first completed wimpels were displayed at Beth Shalom in October 1994. (To date over $30,000 has been raised from 22 wimpels.) More people will get to see them when they are exhibited at the Meisel Museum in Denver from December to February 1998; they will travel to the Skirball Museum in Los Angeles some time after that.

Synthesizing American and European art and tradition, the wimpels commemorate a wide range of occasions in a variety of fabrics and styles.

With her friend and cocongregant Yvonne Stein, Hartman created 12 Hebrew-month wimpels designed to honor the birthdays of religious-school students. With an image appropriated from a fifteenth-century Dutch woodcut depicting Rosh Hodesh, each 9-by 15-inch strip of cotton was photographically silk-screened and the panels pieced together by machine. The original image, depicting three men on a hillside with the sun, moon and stars overhead, was altered to include a woman. On each of the wimpels the artists used colors and images appropriate to its month and inspired by the seasons. For instance, a Hanukka menora is pictured between the English and Hebrew letters for the month of Kislev, and a watering can poised over a small tree decorates the Shevat (spring-time) wimpel.

Despite the wimpels’ beauty, Stein doesn’t consider herself an artist but more of a craftswoman. “I’m the technician of The Wimpel Project,” she explains. “Leslie brings me the arts and I do the finished product. I’ve always liked to sew, but not clothing. I never took formal sewing classes, and usually work on decorative things around the house — curtains or bedspreads.”

“When Leslie first approached me with the concept I had no idea I’d be doing this two years later. I did this initially out of friendship. The 12 children’s wimpels took me about a month while the kids were away at summer camp.”

Stein feels the wimpels have been so successful because “It has been updated for boys and girls. It’s open to individual interpretations, creative whims. People can look at a wimpel with their name on it wrapped around the Torah. They’re very colorful and that appeals to people also.”

“They help enhance the service,” he explains. “Just learning what a wimpel is has helped to tie us to our Torah in alot of different ways.”

In an effort to educate children about this tradition, a preschool wimpel was conceived for the Tot Shabbat services. A broad swath of pink cloth was decorated with the children’s drawings and inscribed with the prayer, “Be as strong as a leopard/as light as an eagle/ as swift as a deer/ as brave as a lion.”

The next wimpel was created by Louise Silk, another local fiber artist, noted nationally for her quilt installations which explore women’s roles in Judaism.

“I knew about wimpels,” Silk explains. “I saw them in the museum in Tel Aviv. I grew up in a Zionist family and really had no religious base per se. I had an adult bat mitzva in 1983 because I had young children going into school and I was embarrassed [by what] I didn’t know. I learned to read Torah, do the haftara, read the service.

“I was a professional quilt-maker and I had a Jewish life, and they were separate. One day I had a revelation. If I used [Jewish] content in my work, it would give it new meaning. It was incredibly successful.”

After Silk first met Hartman at a bar mitzva, they collaborated on an installation of hand-silkscreened talit entitled The Daughters of Zelophehad Speak Right, based on a story taken from Numbers 27:2–7. The women got along well, so when Hartman approached Silk about contributing to The Wimple Project, she immediately said yes.

What she created was a quilted cotton baby-design wimpel with hand-painted lettering. Solid Stars of David contain the dates. The stars are separated by squares of cloth made to look like three-dimensional blocks. The entire piece uses light pastels with polka-dot and flower designs. In a traditional American quilt pattern called Baby Blocks, the wimpel was soon filled with the names of the community’s newborns.

“Judaism is an evolving religion,” explains Silk. “Its is our responsibility to take the traditions of the past and make them relevant today.”

One of the more remarkable aspects The Wimpel Project is the wide range of religiously identified artists involved. Ilene Winn Lederer, painter and children’s-book illustrator, grew up in Chicago with scant Jewish education. “I went briefly to Sunday school [but] we weren’t really active.”

The turning point came when she joined a Jewish youth group when she was 18. “At the end of that year I went to a camp, was given a Hebrew name and really bean to connect with my Jewishness,” Lederer recalls.

Although she is drawn to traditional sources, she “had no knowledge of [ wimpels] as a decorative art. I knew they wrapped the Torah.” However, it was a natural process for her to become involved. “It’s the old cliche: What goes around comes around — and wraps around,” she jokes.

Lederer originally donated artwork for a fund-raising flyer, but when a beloved former sisterhood president, Shirley Bernhardt, died, Lederer was compelled to create a wimpel in her honor.

Inspired by a line from the Book of Job, “When the morning stars sang together all Divine beings shouted for joy,” Lederer’s 9-by-9-inch wimpel (since this is an arts-oriented project there are no standard sizes) is a stunning masterwork of design and color, hand-painted on muslin with fabric paint. A bright, stylized sun rises over a rolling green landscape, with stars dotting the sky. Bernhardt’s name in English and Hebrew nestles in a valley and a white dove hovers protectively above.

Hartman’s esthetic style has remained in flux throughout the project. Whereas some wimpels are very simple, a privately commissioned High Holidays one (which brought in $1,800 to the congregational coffers) was remarkably intricate and colorful. Splashed with bright colors and patterns of flowers and leaves, Hartman used a variety of techniques to create a kaleidoscopic interpretation of the season, including photographic silkscreening of a circular mandala-like pattern on one panel inscribed “Shine in the light of Torah.”

Poignant evidence of this shift in style came on October 8, 1996, when a fire broke out at Beth Shalom.”It was very traumatic,” she remembers. “Looking at the fire from the outside, flames were coming out of the fifth-floor sisterhood office window where some of the wimpels were stored.”

Congregation members explained to the firefighters the importance of the Torahs, so when the five-alarm blaze was contained, they allowed people into the building briefly to bring the scrolls out.

Hartman went into a first-floor lounge where the birthday wimpels were on display and found “the water literally up to my knees.” It had risen to the very bottoms of the hanging wimpels, so she brought them home for safekeeping.

“I really thought the ones in the sisterhood office would be a total loss,” she says. “A fireman went up about a week after and found them on the floor under ceiling tile. While they suffered from water and smoke damage, they were basically intact.”

Arthur Plotkin of the Nu-Life Cleaners and Shirt Laundry, cleaned without charge all damaged ritual objects, and after several attempts with different solutions they managed to salvage the wimpels. Many were wrapped around Torahs and put in temporary storage until the synagogue finishes rebuilding.

Not surprisingly, Hartman was inspired to create a special wimpel memorializing the event.

She drew a tiny picture of the synagogue with the date of the fire. “There is a special prayer, the gomel prayer, inspired by Psalms 107,” Hartman says. “You’re supposed to give thanks to God when a near miss happens. I thought we needed to write this prayer on the wimpel.” What she wrote in English and Hebrew was “Let them give thanks to the Lord for His mercy.”

All the wimpels will be used when the main sanctuary opens for the High Holidays this month. Meanwhile, The Wimpel Project is still going strong. Several more have been completed, including one for a bar/bat mitzva, a memorial and a special-occasions one.

Hartman’s enthusiasm for the art of wimpel-making has spread across the country as several congregations have indicated interest in doing their own projects. That new awareness together with the achievements of The Wimple Project have succeeded in fulfilling Hartmans’ dream of resurrecting and transforming the tradition.

Erik Rosen is a staff writer at The Jewish Chronicle in Pittsburgh.