This year, for the first time, February is National Jewish Disability 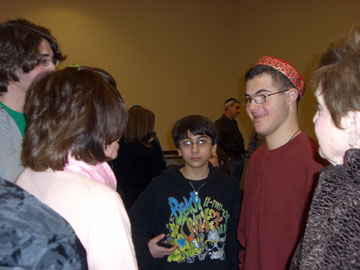 Awareness Month. The idea was first proposed by the Jewish Special Education International Consortium, and it has been picked up by Jewish organizations and agencies across the religious spectrum, including the Union for Reform Judaism, United Synagogue of Conservative Judaism, and United Jewish Communities. To mark the month, NJJN will publish a series of articles on special-needs families and programs. Next week: Special education in synagogue religious schools.

Anne Elmowitz, a longtime member of Congregation Agudath Israel of West Essex in Caldwell, has a 36-year-old son with autism. Aaron has been a fixture at Shabbat morning services since he was small. Back then, she said, she had her work cut out for her.

“When he was really little, the word ‘autism’ was not even used. It was ‘communications handicap,'” she said.

The family found little support in their own community.

“We did everything on our own,” she said. “It’s hard enough having a child with special needs, but if you have to blaze trails constantly, it’s difficult.”

And she’s still at it. If she and her husband, Marvin, are away from their West Caldwell home for the weekend, there is no one from the congregation to bring Aaron – a resident of a group home in the town run by the Jewish Service for the Developmentally Disabled of MetroWest – to shul.

And through the years, there was typically little for him programmatically or socially at the synagogue.

About one year ago, Anita Finkel of West Orange, whose 22-year-old daughter Zahava was diagnosed with Asperger Syndrome at the age of 17, decided to start what has become known as an “inclusion committee” at Agudath Israel. Elmowitz jumped at the opportunity. She joined mostly to help other parents, but the committee’s work will ultimately benefit Aaron as well.

The committee also attracted congregants like Liz B., a younger woman with preschool children (who asked that her full name and that of her son not be used, since not every member of the family is aware of his disability). Liz spends her days advocating for her nearly four-year-old son Howie (not his real name), getting him to speech, occupational, and physical therapy sessions. Howie, who has epilepsy, had the left lobe of his brain surgically removed when he was two to help control his seizures. He has some resulting developmental and social delays that Liz hopes he will outgrow.

Like Elmowitz, Liz found little specific support in the community. “There’s nothing for epilepsy in the Essex County area,” she said. She ultimately joined an Internet support group. But unlike the situation for Aaron more than 30 years ago, the Agudath Israel preschool has embraced Howie. He spends his mornings in a special-needs preschool and three afternoons a week at the CAI preschool, where director Judy Tabs provided a “shadow” aide and special teachers.

According to his mother, Howie is thriving there, and the family feels comfortable in the community.

The differences in the experiences at CAI for Howie and Aaron are striking. They reflect how far the community has come over the last few decades, but there are still gaps, whether a dearth of programs that the children of Elmowitz or Finkel or Liz B. can participate in, a lack of sensitivity on the part of other congregants, or a blind spot among professionals.

Those are the kinds of gaps that the inclusion committee hopes to fill. It was formally established last spring.

The committee has three goals: to provide support for special-needs adults and children and their families; to create awareness in the congregation of the issues, and to achieve inclusion itself – not just physical accommodation and tolerance for people with special needs, but an environment of embracing them and integrating them into the community.

“Special-needs individuals are not just mitzva projects,” said Finkel, paraphrasing Rabbi Bradley Artson, who served as keynote speaker at a recent conference on the Jewish community and special-needs children in the Washington, DC, area. “You are, for your own benefit, understanding and embracing them.”

Members of the committee and its work are focused not only on special-needs children in the classroom, but on a range of challenges, from children with food allergies to adults with sight and hearing loss to any number of physical disabilities. The committee does not fall under the aegis of social action at the synagogue, to specifically avoid the idea that it’s part of mitzva work.

The inclusion committee is new to this area, but has been around for at least a decade in other communities that have been more proactive around issues of disability. For example, there are 12 such committees at synagogues in the Washington, DC, area, where The Partnership for Jewish Life and Learning, a partner agency of the Federation of Greater Washington, publishes a full guide to disability awareness in the region and holds an annual conference. It was after attending the 2007 conference in DC that Finkel began to consider creating an inclusion committee locally.

At Agudath Israel, one of the committee’s first tasks was to conduct a formal assessment of how the community is doing: where it is succeeding in terms of special needs and which needs are most acute. Members conducted interviews among every segment of the community, from professionals to sisterhood and men’s club leaders to the office staff.

According to several professionals and board members, this systematic approach was key to revealing critical gaps. “The eye-opening area for me was that it’s broader than just the religious school/day school arena,” said CAI’s educational director, Susan Werk. Speaking with Shari Casper, the committee interviewer, Werk realized that she had not included anyone beyond school-age children in considering how to use community special-ed resources. “That was a lightning bolt that went off,” said Werk. “We have [older] kids in the community who need to be serviced and included. I realized we are not doing enough in that area.”

Office staff, meanwhile, reported receiving plenty of calls from people planning visits to the synagogue inquiring about everything from building accessibility to the availability of Braille prayer books.

One issue the inclusion committee doesn’t have to confront is physical accessibility in the synagogue. Having just completed a full renovation, the building is compliant with standards set by the Americans with Disabilities Act. “We now have elevators, water fountains at lower levels, a ramp going up to the bima, two sets of mezuzas so some are lower, and hearing devices in the sanctuary,” said Finkel. “Before the building was finished, I went on a tour with a whole list of things to check.”

The group is beginning to have an impact.

Religious-school applications now include questions about special needs. Werk has begun considering what questions ought to be added to the congregation’s membership application as well. She is reconsidering what materials to include in the synagogue’s special-needs resources. And plenty of sensitivity training is beginning to take place.

In its first community program, on Jan. 25 the committee screened Praying with Lior, a documentary about a Jewish child with Down syndrome. Its star, Lior Liebling, and his father, Rabbi Mordechai Liebling, were on hand for the event, which drew over 100 people.

And during the first week of February, the preschool brought Tamar Stern, coordinator of the Children’s Mental Health Initiative at Jewish Family Service of MetroWest, to train teachers in sensitivity to those with disabilities. There are several sensitivity trainings scheduled for different populations within the synagogue community in March and in April.

Plenty of challenges remain. Even the most outspoken advocates on the committee are guarded in their expectations. They paid out of their own pockets for the training manual that came with Praying with Lior. Liz B. was quick to acknowledge her frustration that her son is never invited to the other children’s birthday parties, but assumes that showing parents how to successfully include him would be out of the question. Similarly, Elmowitz hasn’t even considered the idea that the committee could work to provide rides to shul for her son from appropriate members of the congregation. Considering the simplicity of fixing the issue, Werk said, “I can’t believe we don’t do this. We should be able to find someone and try it for an upcoming Shabbat, even if Anne isn’t away.”

Finkel, however, continues to push for some kind of resolution to her daughter’s social isolation and to remind people not to assume things can’t be done.

Werk said she shares Finkel’s dream that some day Agudath Israel will launch the kind of conferences the Washington-area synagogues and agencies hold. For now, they satisfy themselves with smaller achievements.

Numerous local agencies provide resources for individuals with special needs and their families:

Resources outside the local community are also available to congregations interested in increasing inclusiveness for special-needs individuals. Here are some that are easy to access: