Designed of translucent plexiglass prisms, the ark projects from the wall in three triangles. Its rainbow colors are gently diffused through the angled prisms. 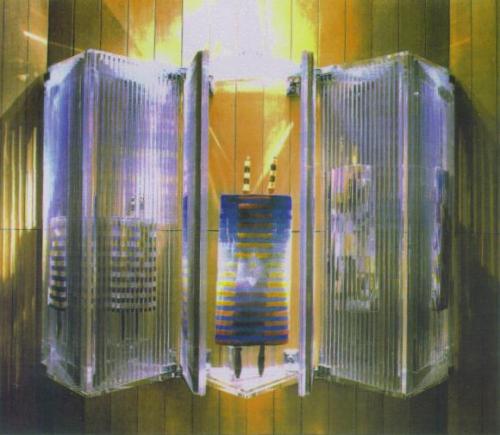 Says Agam, “I wanted to dematerialize the Torah, which contains all the moral values of the Jewish people, and to have its spiritual feeling radiate out into the space of the synagogue. The Torahs seem to suspended in the air, and you feel their presence, even though you don’t see them until you open the doors of the ark.”

In conceiving the windows, Agam notes that he “tried to convey the spiritual essence that Jacob attributed to the individual character of each of his twelve sons, while at the same time defining the uniting element of their homogeneity.” 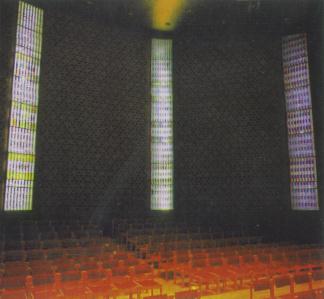 Three of the four stained glass windows — The Twelve Tribes of Israel — designed by Agam for the HUC-JIR sanctuary in New York.

[Synagogue 2000 also has some other pictures of Agam’s synagogue at HUC-JIR.]