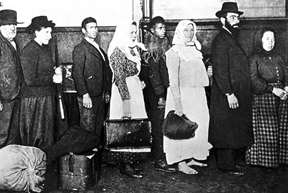 American Judaism is going through the process of three immigrations. Any single one of them is enough to topple established ways of thinking. All three together present us with the largest single challenge since the days when Great Immigration at the turn of the twentieth century brought over two million Jews here, dwarfing the established German community and giving us the Judaism that most of us have enjoyed during the latter half of the century just past. To appreciate the significance of the moment and the opportunity we now have, only this once in a lifetime, we need first to understand what we mean by an “immigration.”

Immigrations need not be from across the ocean, or even from another country. African Americans came here in large numbers, after all, but we do not call their arrival an “immigration.” That is because they came as slaves, with no voice in our domestic affairs. Immigrants bring more than bodies; they bring their voices, so an immigration is the arrival of new voices into the conversation, sometimes voices of people whose bodies have been around for a long time, but who have never spoken up or never been heard. Over the last several decades, three new sets of voices have become audible: women, non-Jews in a Jewish orbit, and Generation X, the next generation (in Hebrew, dor) – hence, named by Synagogue 3000 “Next Dor.”

The first immigration has almost run its course: although women still have a ways to go in terms of such things as equal pay for equal work, or making it to the top of the Jewish hierarchy, they are fully represented as congregational leaders and as rabbis, some of them now occupying large and prestigious congregational positions. The second and third immigrations are still in their infancy. American Jewish life depends on how well we integrate these newcomers into our midst; and how well we integrate them depends on the health of synagogues, still the only major gateway to lifelong organized Jewish life for families. Nearly 40% of all Jews belong to synagogues at any one time. Close to 100% find their way to synagogues for brief occasions or join for a short interval of time. Those figures will change dramatically if the new voices are not appreciated rather than castigated, ignored, or otherwise alienated by the current leadership, which is apt to feel threatened by them. No new immigration is warmly welcomed at first: Anglo-American colonists decidedly disliked the Irish; German Jews had nothing good to say about the Russians. How will we respond to people not born as Jews and to the children of the baby boomers, “Next Dor.”

These two population segments challenge us in many ways. Most significantly, they will alter the ways we are likely to experience Judaism; as a result, they will make us question the kind of community we offer.

For most of the twentieth century, we experienced Judaism as ethnics. Most of us had arrived from eastern Europe in large enough numbers to constitute a critical mass in most big cities; we lived together, went to “all-Jewish” schools, attended “Jewish colleges,” and then moved into Jewish neighborhoods. Our immigrant forebears were not by and large religious. Most gave up the eastern European style of religion they had known, in order to fit in better with American culture; some arrived as socialists, having given it up already. They “graduated” out of places like New York’s Lower East Side but still lacked money and opportunity to direct new institutions – until the Great Depression and the War ended, leaving America the wealthiest country in the world, and the immigrant children, now grown to maturity, ready to strike familial roots of their own. That was the Eisenhower years, and Eisenhower asked every American to join a church or synagogue “of their choice.” So Jews built the synagogues that we still have. The point is, they joined them as ethnics, and used them the same way. They had little religious impulse, had never heard of spirituality, and received everything they needed from Judaism through ethnic ties that connected them to each other, enabled them to fight anti-Semitism of the ‘50s, and allowed them to build and save Israel and to rescue Soviet Refuseniks in the years before the iron curtain came down.

The biggest change now is the weakening of that ethnic Jewish identity. Yiddish is virtually dead, the Jewish Catskills are gone, Jewish humor often embarrasses more than it entertains. This changeover away from ethnicity is especially potent among the two new immigrant groups with whom we must contend. More and more, we find ourselves speaking with Jews by choice or non-Jews in the orbit of the synagogue – through relationships with Jews as their partners, or just out of interest in what they perceive as an interesting religious option. These “fellow travelers” have no ethnic Jewish consciousness whatever. That is not to say that they will not enjoy a klezmer band or some other aspect of Jewish culture. But they might just as easily (or more likely) attend another concert, with nothing whatever to do with Judaism.

The Next Dor population contains the people in intermarriages – the two overlap. As a result, and as part of the mores of this new generation, in general, Next Dor Jews are fiercely opposed to judgmentalism and to boundary definitions that alienate or keep out some people while welcoming others. If they come to synagogue for a social justice program, for example, they are likely to show up with non-Jewish friends, whom they perceive as equally interested, open, and entitled to whatever is going on. Even Seders run by Next Dor Jews are likely to have non-Jewish friends in attendance, sometimes a majority of the people there.

The first requirement of synagogues, then, is that they get rid of the closed-shop sense of Jewish ethnicity; that they open their doors to anyone who wanders in; and that they welcome people regardless of what brings them there. Synagogue 3000 has led the way in making over synagogues in the post-ethnic vein. Both Larry Hoffman and Ron Wolfson have written books that are widely used now by synagogue boards intent on transformation. Ron is known especially for his mastery of the synagogue art of welcome.

But welcome is insufficient. People are welcomed in many competing venues. What makes synagogues different?

Whenever Judaism has made a quantum leap forward, it has been while enjoying relative freedom in a host society that is going through its own form of creative cultural growth. The Babylonian Talmud, for example, is the Jewish equivalent to the process of collecting sacred scriptures that Babylonian Zoroastrians were engaged in at the time. Rashi’s commentaries on the Bible parallel the same Christian effort in the vicinity of Paris during the eleventh century. If we want Judaism to thrive now, we should ask how American culture is changing.

One clear answer is the rise of religious consciousness. While European religion languishes, its churches becoming museums, America boasts what historians are calling a genuine religious awakening. What fuels the awakening is precisely the non-judgmental approach that attracts even unbelievers who, in an earlier era, would have been chased from the church’s doors, if they didn’t run out themselves first. More important, however, is the content of what is being offered: spirituality. It is impossible to go to successful churches these days without being bathed in what is considered the spiritual. Synagogues too, presumably, should develop authentic Jewish spirituality. But first, we should inquire if Jews are spiritual too? Or is spirituality purely a Christian phenomenon?

What kind of communities, then, should synagogues offer? Here we turn to some church literature on “intentional communities” and a study (not yet published) by Steven Cohen and Larry Hoffman (of Synagogue 3000) and two other colleagues, Drs. Isa Aron and Ari Kelman. Successful synagogues are likewise “intentional,” in that they go beyond programming for their attraction. Instead, they offer the possibility of transcendent meaning; they are highly participatory; they filter everything they do through the prism of their “intention” – their purpose — displaying a commitment to higher Jewish end; and even when offering activities that seem unrelated (a Jewish film festival, for example), the activity is not seen as a separate offering for a single night, but as part and parcel of a larger understanding of Jewish identity – which is infused throughout the synagogue’s dealings with its members.

For two years, S3K engaged in research such as this, to determine our own intentionality. We decided not to focus on the Orthodox population segment, since it seems to be thriving on its own. It does not need us. The people who do need us are the non-Orthodox Jews, especially (but not exclusively) those with fewer than two Jewish parents. We have now developed a sophisticated approach to these non-Orthodox Next Dor Jews, as we look ahead to the inevitability of their replacing their parents, the baby-boom generation.

With the support of the Marcus Foundation, we have selected five sample synagogue sites, and have been working with them to develop their sense of intentionality; to get them beyond the “programming only” mentality; to work their way toward as full sense of inclusivity; and to see that the next great synagogue frontier is an outreach to the population in question. The synagogues have been asked to undertake such engagement with an entirely new sense of what a synagogue is and does – it serves outside its membership base, for example, bringing Judaism to the people, as opposed to offering programs which (they hope) will draw the people to them. Despite the high demands (fiscal and philosophical) made on synagogues to even qualify for inclusion in our sample, over fifteen congregations applied, and we have heard from many more since – as far away as Winnipeg, Manitoba. The next step is a founding conference in August that brings together synagogue teams from each of the five congregations to learn how to launch their sites successfully.

That these immigrations will occur is certain. Of the three, the changeover of generation may be the most significant. No matter how many women make their way into synagogue leadership, there will still be men there to serve along with them. Regardless of how quickly the children of intermarriages increase, we will still have children of in-marriages to deal with. But the baby boomers are not forever. As they age, they will have to abandon the Jewish tomorrow entirely, handing it over completely to their children. S3K has therefore committed itself to building a national network of next Dor synagogues. We are grateful to the Marcus Foundation for its support of this initial stage of the vision.